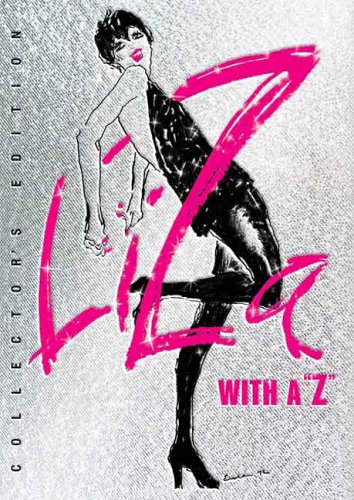 In 1972, Liza Minelli and Broadway legend Bob Fosse took the Oscars by storm with Cabaret. That same year, the two paired up once again to create the spectacular musical special Liza With A Z, making television history and carting home four Emmys in the process. Now, Liza and the producers of the Academy Award-winning Chicago bring the glamour and glitter home again on DVD, fully-restored and digitally remastered.

The DVD Holy Grail for Liza Minnelli fans finally surfaces after 30-some years: Liza with a "Z", a splashy TV special from 1972. And wow, is it ever a product of its era. Minnelli and director-choreographer Bob Fosse were at the top of their popularity in 1972, having just made Cabaret, the blockbuster musical for which both won Oscars. Liza with a "Z" places the still-coltish Minnelli on the stage of the Lyceum Theater, in a one-night-only performance covered by Fosse's eight cameras. Songs by "i"Cabaret composers John Kander and Fred Ebb provide a spine for the show, including a breathless rendition of "Ring Them Bells" and the tongue-twisting "Say Liza (Liza with a 'Z')," a goofball number that sounds more like one of Danny Kaye's patter songs than a tune for Liza Minnelli.

Liza treats each song as an emotional Mount Everest, never holding back a thing, and the result is a psychodrama played out in the klieg lights. (The outrageous costumes by Halston don't hold back a thing, either; Studio 54, here we come!) Memories of the all-or-nothing style of her mother, Judy Garland, are already heavy in the air by the time Minnelli reaches "My Mammy," and workouts on "God Bless the Child" and "Son of a Preacher Man" confirm the singer's approach.

As for Fosse's choreography, there are signature moves aplenty--his dancing so frequently suggested a choreographer lusting for actual sex to break out on stage. "Bye Bye Blackbird" gives Minnelli and her backup dancers a chance to stretch out in an echt-Fosse feast of bowler hats and white gloves. The bell-and-booty shaking in "Ring Them Bells" and the loony tuxedo-clad cowpokes in "I Gotcha" hint that Fosse was in the midst of a manic phase. Speaking of which, Minnelli tackling Joe Tex's "I Gotcha" is one of those jaw-dropping mismatches that she salvages only through dint of daft commitment. No quarreling with the Cabaret medley; say want you want about Liza, she owns those songs. Minnelli and Fosse won Emmys for the show. The restoration of the original materials looks about as good as can be expected, with the spirit of a glitzy seventies TV variety special quite intact. --Robert Horton

The various sub-genres of rock music, listed by decade of origin.

The decade where the band is listed is the decade in what the band was formed, or when the artist first got active.

But you can feel free to edit in your favorite rock/metal bands.

To write a new article, just enter the title in the box below.

This is the Rock Music Wiki which is, suprisingly, a wiki about Rock. A wiki is a website which anyone can edit (like wikipedia) so that everyone can share information. This wiki is about rock and rock only so no other subjects please.

On this wiki you can add/read about bands, band members, gigs and etc. Anyone who changes pages on this wiki in a bad way is wasting their time because it is easy to change it back.